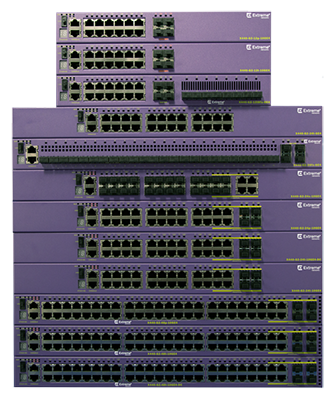 Flexible 10GBE Port Upgrades
All X440-G2 base models come equipped with 4 upgradeable 1GbE ports, resident on either the faceplate or rear panel of each model. These 1GbE ports can be upgraded to 10GbE Ethernet via a simple software license. This gives administrators the option to increase switch uplink speeds without replacing the entire switch.

High-Performance Stacking
ExtremeXOS SummitStack-V capabilities allow up to eight X440-G2 switches to be stacked together via two of the native X440-G2 stacking ports. SummitStack-V allows use of standard 10Gb Ethernet cabling and optics technologies, providing longdistance stacking connectivity of up to 40 Km while eliminating the cable complexity of non-standard stacking options. X440-G2 switches can be stacked with other X450-G2, X460-G2, X670-G2 and X770 switches via SummitStack-V so long as all are running the same version of ExtremeXOS.

IEEE 802.3AT Poe-Plus
X440-G2 Series switches support both IEEE 802.3at PoE-Plus and IEEE 802.3af PoE to enable connection of standards compliant PoE devices today and into the future. Power over Ethernet allows connection of Ethernetpowered devices, such as wireless access points, Voice over IP phones, and security cameras. The X440-G2 can also support full PoE-Plus 30W power across all 48 ports with an external redundant power supply (RPS).

Role-Based Policy
The X440-G2 supports role-based policies that can be centrally administered through the ExtremeManagement (formerly Netsight) policy manager. This policy framework empowers network administrators to define distinct roles or profiles to represent industry-specific operational groups that may exist in an education or a business environment (e.g., administrator, teacher, student, guest). Each defined role can then begranted individualized access to specific network services and applications and these access privileges remain associated with users as they move across both wired and wireless network access points.

ExtremeCloud Management
Provides a single plane of glass for cloud managing both the wired and wireless components of your network. Zero touch provisioning also significantly reduces deployment times. Select X440-G2 models have been enabled for use with ExtremeCloud.

Extended Temperature Range Support
The X440-G2 include three switch models that support 0°C to 60°C operating range (Models 16539, 16540 and 16541) to address the unique environmental needs of specific industries and/or locations.

These features ensure both the security of the network and of users accessing the network. 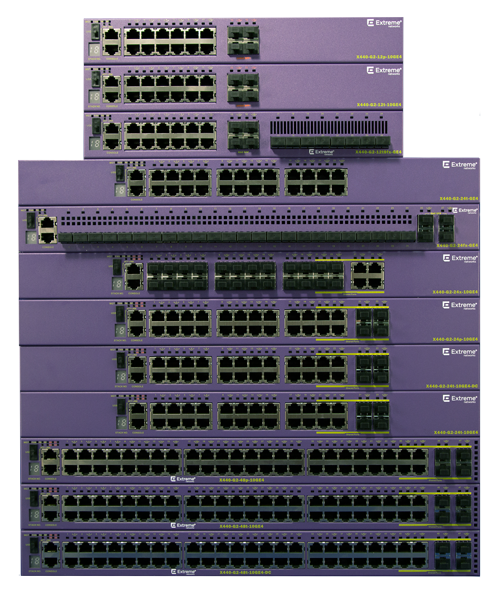